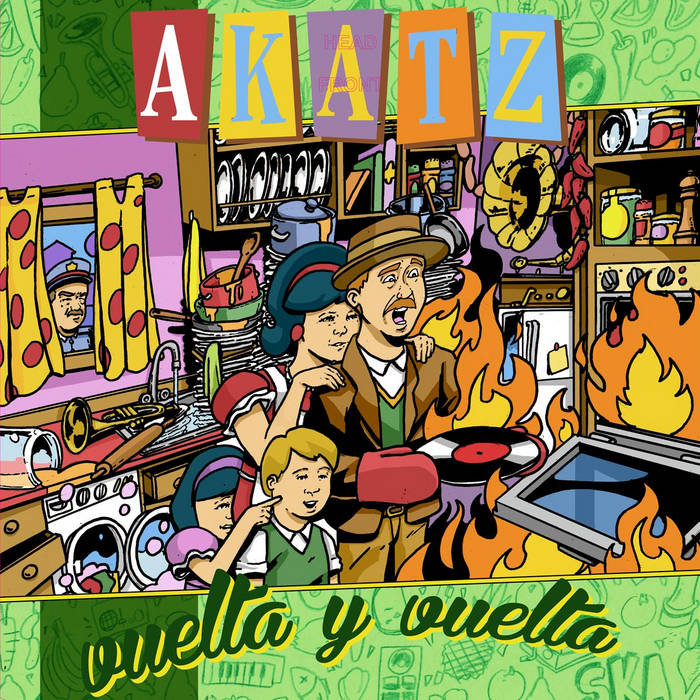 At last, it has happened and we should rejoice about it. The paths of Spain’s main Jamaican music label and the Basque Country’s most veteran Ska / Rocksteady outfit have finally come together, after 23 years.

Liquidator Music shows a firm commitment to Akatz by releasing this album, ‘Vuelta Y Vuelta’ (Turn And Turn), which is the fourth in the band’s career. Previously they have also released demos, 7”s, EPs and been included on compilations. This is not exactly a prolific output for such a long career, but each release has been accompanied by relentless live work. Live activity is the territory where Akatz operates with greatest ease. Touring is where the group has been consistently showcasing their talent, their love for classy music and their eagerness to entertain audiences at festivals, street fiestas, music venues and community centres.

It is appropriate to expand this account into the live forum as their performances are currently one of Akatz’s a biggest charms. Without looking back too much over the past -for they are children of the times and circumstances in which they live in- it is worth emphasising that their live performances proudly reclaim aesthetic elements that make them unique: a line-up of elegantly dressed musicians, attired in suits and short-brimmed hats, a repertoire that pays homage to vintage Jamaican rhythms, and the front man, Dr. Baltz, is a showman who knows how to win over the audience, constantly joking and interacting with them.

Akatz are not Jamaican, or British, and they do not attempt to appear to be. To their credit, they have found their own way to be regarded as genuine, recognizable and unique performers of music of Jamaican origin. They sing their own compositions, in spanish and basque, relating their everyday realities - their lyrics are seasoned by the rough character than Bilbainos are known for, and they do so over a foundation of jamaican oldies spiced up, where appropriate, with the dancing elements of Swing, Punk attitudes or even ventures into suggestive live dub remixes if the occasion requires it.

Recorded at Euridia studios by Ibon Larrucea -one of the founding member of the band- and mixed by cantabrian producer Roberto Sanchez at his A-Lone Ark Studio, Akatz fourth album sums up the entire range of their music. The spectrum of styles ranges from instrumental ska that will take your breath away (Skarmentu), through mellow Rock Steady (Empty of You), anthems designed to be chanted for audiences to shout their head’s off at the peak of any social event (Mas Ruido, Fiesta del 73, Joaquín Murrieta), organ dominated, early Reggae (Comida Casera) , songs of social criticism rooted in current events (Skandalo) and even tunes that achive an astonishingly natural connection between Jazz and Ska (Ansiedad, De Cine).

This brand new Akatz work is not just a nice 12 inch vinyl album to be kept fondly on the shelf, or to be played at an oldies session, since it also has its replica where these Bilbao lads offer their best side: on a live stage.